Previously, it was a little side-room, disconnected from the home environment, sometimes without any ventilation or natural light, and simply had a working surface and shelves for storage use .

The basement in the estates of the aristocracy around Europe was used mainly as a workspace, in which the servants, who were kept out of sight, worked from before sunrise, storing products, sometimes acting in the role of butchers in killing animals (not shechita!) and preparing, smoking and cooking delicacies, besides serving and cleaning.

There were no fridges and heating and baking and cooking weren’t done using electricity or gas, but with different combustible materials, so that the kitchen and the unpleasant smells which emanated from there were kept far away from the estate’s tenants.

The poor who lived in lowly conditions didn’t always have windows for ventilation and natural light in their sparsely furnished cottages and next to the huge fire stove in the kitchen was a place for people to sleep because it was the only warm place in the single space.

In our regions, namely the Middle East, the weather is different, and already in the distant past (in houses dating from the Iron age), cooking was done outside the living rooms, to avoid the smoke it produced. Even today, in Arab villages which don’t have any real infrastructure, one can see fire stoves in the yards of houses, situated next to a well or a cistern.

In the late 19th century, following the Industrial revolution, far-reaching changes and improvements were made – new burning materials were used; there was the discovery and usage of electricity; mass production in factories began; there was quick transportation via steam trains and industrial tools were in regular use. If you’ve seen “Downton Abbey” you’ll possibly recall the references to electricity and to a mixer in the servant’s wing.

Today, the changes in society have removed most of the opulent middle class which employed servants.

The kitchen eventually became accessible to most of the population. Women attended classes to learn how to cook (even a simple thing such as an egg.) Pamphlets and cookbooks became popular and high demand commodities, and the housewife searched for culinary innovations and helpful gadgets.

Remember chauvinistic commercials from the 60’s in which a contented woman is depicted wearing an apron and holding a mixer? Actually, why go back so far? Mixer commercials are still portraying women like that…

But the kitchen still remains a room for cooking and for storage, accessible via a door. Apartments from the last century in Europe had a small kitchen, a tiny room without any .ventilation or natural light

Yet in our small country, beginning from the time when the living space and apartment size started to increase, a small table began to be seen in the kitchen, and with it the expansion of the kitchen, which was sometimes connected to the balcony, that balcony area sometimes being used as a pantry.

At the end of the 60’s, space and financial welfare continued to grow in Israel. Wealthy families created another eating space in another place, in which they dined only during Festivals and weekends without having to move or open a folding table.

The kitchen was taken over by the whole family and became the heart of the house and, indeed, during the week, the whole family began to have all their meals in the kitchen. Big and small meals are part of the family lifestyle and most family members are involved in cooking, food preparation and even in putting away the shopping. The length and depth of the kitchen counter increased, not to mention the size of the fridge, sink and stove. Oven sizes also increased as did the width of drawers. Klappas (cupboards which open upwards) appeared. All this came as part of the technological development that occurred in the manufacture of hinges, industrial glues and the ingenious use of “smart” machinery.

Presently, the size of the apartment in many projects is reduced (while the actual cost of the apartment continues to skyrocket) and in the “race to make a million”, not everyone has the time to sit down for a daily family meal.

The open kitchen is common today and it is part of the living space that requires a certain aspect of order and organisation so that visitors who come to the home won’t know what you ate for dinner last night! If tidying and organisation are not your strengths, you might very well want to hide the kitchen area, at least partially.

With the help of both kitchen designers and interior designers, changes can be made around the designated kitchen space that give solutions for storage, lighting, furniture and the utilisation of the space. How, indeed, do we make the kitchen into a functional and well-designed area? 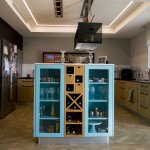 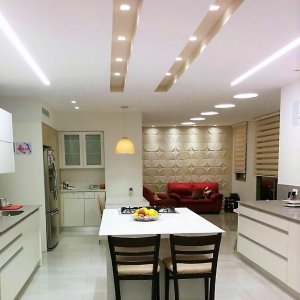 When we plan a new kitchen, the questions we must ask are:

Who uses it and how can we create a kitchen that would be most fitting and useful for them?  Will the kitchen be a place for daily family meals or merely a place from which to grab something quick to eat without having to sit down with others for a meal?

The aspiration is to utilise the given space to the utmost, but without overdoing it. We should want to create a clean look and dishes will need to be able to be stored in cupboards. To do this, we’ll have to build enough storage space with the correct dimensions to suit the kitchen size and the space beside it. A feeling of spaciousness creates a more pleasant environment and makes one feel more comfortable when occupied with tasks in the kitchen.

In small kitchens, having an “island” may break the feeling of “flow” and may leave only minimal space for passage. Half an “island” or pull-out extra working surface can be an excellent solution.

Wide cupboard facades and doors can give the impression that the kitchen is well-designed..

Today there are electrical mechanisms that allow easy opening without handles, but you have to remember to neutralise them before Shabbat.

They are comfortable even for men taller than 180m.  However, for shorter people, it’s best, obviously to place the higher cupboards at a lower height. For what happens with tall and short people who live together visit my website to find some solutions!…

The cost of the kitchen is the biggest expense at home (in relation to sq.mtr) since it is made with all the details of carpentry, tiles, plumbing, lighting and appliances.

In addition, there is an extremely wide range of sinks, taps (tall, pullout), stoves (induction, halogen or gas) which come in different sizes and qualities.

Take a deep breath! So many details and decisions!  The best advice I can give is for you to take time in planning your perfect kitchen and take advantage of the input of a professional designer. Good luck and bon appetit!